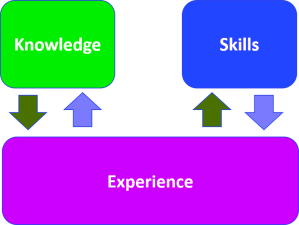 “Only the disciplined ones in life are free. If you are undisciplined, you are a slave to your moods and your passions.” — Eliud Kipchoge

Eliud Kipchoge of Kenya shattered the world record in the marathon by one minute and 18 seconds with a time of 2:01:39. This equates to an unfathomable average mile of 4 minutes, 38 seconds over 26 straight miles. He broke the record by a wider margin than any man in over 40 years. Kipchoge shared with The New York Times which did a profile of Kipchoge that since he became serious about the sport he’s recorded every single workout he’s ever done in a notebook. He’s now up to 15 notebooks, one for each year he’s been doing it.

That’s deliberate practice. And, even if you’re never going to set a world record, it’s worth understanding that even the best at what they do must work extremely hard to see improvements.

In 1908 Johnny Hayes won the gold medal at the Olympics in London in the marathon with a time of 2 hours, 55 minutes and 18 seconds. At the time it was known as “the greatest race of the century.” That time today would barely offer breathing room to qualify for the Boston Marathon.

In the 1920s and 1930s there was a Finnish runner by the name of Paavo Nurmi who set all kinds of world records (22 to be exact) in a variety of distance runs. None of his competitors could come close to matching his times for a number of years. Although he was talented, his competitors would eventually figure out it was his training that set him apart. Nurmi would pace himself using a stopwatch, use interval training to build his speed, and train year-round.

Ray Allen is arguably one of the greatest shooters in NBA history. He had one of the smoothest deliveries but it wasn’t always like that. After scouting him in high school UCONN coach Jim Calhoun (who Allen would go on to play for) said, “That’s the flattest jump shot I’ve ever seen.” Allen dispelled the rumor that he was born with the gift of a shooting touch in an interview with Jackie Mac Mullan a number of years ago:

“I’ve argued this with a lot of people in my life,” Allen said. “When people say God blessed me with a beautiful jump shot, it really pisses me off. I tell those people ‘Don’t undermine the work I’ve put in every day.’ Not some days, every day. Ask anyone who has been on a team with me who shoots the most. Go back to Seattle and Milwaukee, and ask them. The answer is me — not because it’s a competition but because that’s how I prepare.” It’s hard to envision all the work that leads up to it when you only see the finished product.

It’s easy to chalk up most people’s performance in life to their innate God given abilities but talent can only take you so far. These methods may seem obvious today but they were groundbreaking at the time. Once everyone else adopted them it lifted the competition and leveled the playing field, bringing down everyone’s times in the process.  In the past, knowledge offered much of this type first mover advantage. Technology has leveled that playing field in many ways. Almost everyone has the sum total of human knowledge in their handheld pocket supercomputer these days. It’s skill that now makes the biggest difference but even talent alone can only take you so far in life. Once a person reaches a certain level of performance, even additional years of practice won’t help them improve if they don’t approach it the right way. Going through the motions doesn’t improve your skills because you’re never pushed outside of your comfort zone.

Research on doctors, as outlined by Anders Ericcson in his book Peak: Secrets from the New Science of Expertise, found that there is a great difference between knowledge and skills based on his findings that even those doctors who have been in practice for 20 or 30 years do worse on objective measures of performance than doctors who are just 2 or 3 years out of med school. Harvard Medical School published a study in 2005 on 62 different individual research reports on the standard of care provided by doctors and how it changes over time. Almost three-quarters of the studies found a doctor’s quality of care declines over time.  Older doctors knew less and performed worse in terms of providing care than those who had fewer years of experience. Just 2 of the 62 studies found doctors got better with more years of service.

This distinction between knowledge and skills lies at the heart of the difference between traditional paths toward expertise and the deliberate-practice approach. Traditionally, the focus is nearly always on knowledge. Even when the ultimate outcome is being able to do something—solve a particular type of math problem, say, or write a good essay—the traditional approach has been to provide information about the right way to proceed and then mostly rely on the student to apply that knowledge. Deliberate practice, by contrast, focuses solely on performance and how to improve it. The assumption that med school, reading medical journals, and attending seminars when combined with years of experience should be enough to improve their skills doesn’t seem to hold for many doctors. Ericcson’s book provides some examples where doctors are taking a new approach to ensure their skills don’t atrophy.

When you look at how people are trained in the professional and business worlds, you find a tendency to focus on knowledge at the expense of skills. The main reasons are tradition and convenience: it is much easier to present knowledge to a large group of people than it is to set up conditions under which individuals can develop skills through practice.

Knowledge is table stakes. Mindless repetition isn’t going to improve your results. Developing useful skills requires going outside of your comfort zone and determining a clear plan of attack for getting better.